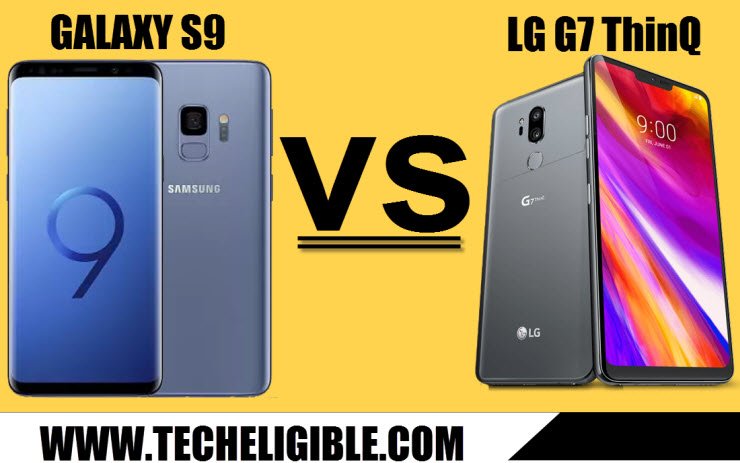 If your phone has got obsolete and you are probably wondering if it is worth your money for an upgrade, you may also be wondering which is the best phone and which device you should buy from LG G7 ThinQ vs Samsung Galaxy S9, you came at right place to have comparison between both of these devices, the year 2018  has been the best year for smartphones. Many smartphones with a whole new concept have hit the market. 2018’s technology has brought a cultural revolution to the phone’s market. let’s look at the key differences between the newly announced LG G7 ThinQ and Samsung Galaxy S9.

LG G7 ThinQ, LG defines it as the smarter phone whereas Samsung calls Samsung Galaxy S9 as the camera reimagined. It is indeed a difficult comparison between these power packed devices. They both have almost identical specifications. However, by comparing LG G7 ThinQ with Samsung Galaxy S9 of its spec sheet gives you an adequate idea about both the devices. There are few segments where Samsung Galaxy S9 does exceptionally well such as its unique curved glass design, a super AMOLED full HD+ display that doesn’t feature a notch at the top of the display. On the other hand, there are a few segments where LG G7 ThinQ excels.

It this was a beauty contest then it would have a really hard time declaring a winner among these two. Both devices are made of beautiful front and rear glass with aluminum frame. Samsung Galaxy S9 is curvier in design and looks fantastic, while LG G7 ThinQ is five millimeters taller, three millimeters wider, less than a millimeter thicker and around one gram lighter. Overall both phones are smudge magnets, no matter how hard you try to keep them clean and hence a case is necessary. Both devices are IP68 water and dust resistant, but LG G7 ThinQ is one of those few smartphones that supports MIL-Spec 810G out of the box for drop resistance.

In the battle between displays, Samsung Galaxy S9 wins but by a very short margin for not adopting the notch and for providing one of the beautiful displays in 2018. Samsung Galaxy S9 has a 5.8 inches, Super AMOLED capacitive touchscreen, 16M colors with 570 PPI density. While LG G7 ThinQ has a 6.1 inches, IPS LCD capacitive touchscreen, 16M colors with 564 PPI density. The dual RGBW pixel configuration in LG G7 ThinQ makes the display crazy vibrant and beautiful. Both the devices come with Corning Gorilla Glass 5 protection. LG G7 ThinQ features a notch at the top of the display which some people dislike.

Now in this department, both the phones come with Android 8.0 (Oreo) out of the box. The Samsung Galaxy S9 visual aesthetics are more pleasing with a denser grid of icons and more useful features like edge shortcuts. While LG G7 ThinQ can add more navigation buttons at the bottom. LG has brought an AI button that doesn’t reinvent the wheel and launches the Google assistant. Bixby on S9 is great, but Google Assistant is more offering. Samsung Galaxy S9 comes with Exynos 9810 Octa – EMEA clocked at Octa-core (4×2.7 GHz Mongoose M3 & 4×1.8 GHz Cortex-A55) and Qualcomm SDM845 Snapdragon 845 chipset – USA/LATAM, China clocked at Octa-core (4×2.8 GHz Kryo 385 Gold & 4×1.7 GHz Kryo 385 Silver) while LG G7 ThinQ is powered by Qualcomm SDM845 Snapdragon 845 chipset clocked at Octa-core (4×2.8 GHz Kryo 385 Gold & 4×1.7 GHz Kryo 385 Silver). Even with 4 Gb ram on each, their launchers are fluid and runs Graphics-intensive games smoothly on either phone.

Both the flagships from Samsung and LG have the best cameras on the market. LG G7 ThinQ has dual Dual 16 MP camera with f/1.6 for the primary rear camera and f/1.9 for bokeh effect by the secondary rear camera. Samsung Galaxy S9 has a single 12 MP camera with f/1.5. Both the phones are capable of recording 4K videos. Samsung Galaxy S9 has slightly more features as it is capable of recording [email protected] and has a super slow-mo option which can record up to [email protected] that is it stretches a 0.2 secs video into a six seconds footage. Both the phones have 8 MP front camera with f/1.9 in LG G7 ThinQ and f/1.7 on Samsung Galaxy S9.

Both the devices have Non-removable Li-Ion 3000 mAh battery on the spec sheet, but LG G7 ThinQ wins in this department. LG G7 ThinQ has slightly better battery management as compared to the Samsung Galaxy S9. The battery runs through a whole day in LG G7 ThinQ. The battery life is not high on the Samsung Galaxy S9. It runs through a whole day for an average user but on heavy days with much navigation, much music playing, much screen on time watching videos and social media that would be enough to kill S9 before a single day. Both of the devices support wireless charging, and it is super fast on Samsung Galaxy S9.

To pick any one winner among these two devices is a difficult task and the reason behind this is that they both have identical specs on paper. However, Samsung Galaxy S9 is slightly better and has better build quality, a great Camera, a beautiful curved super AMOLED display with no notch at the top of the display. Samsung Galaxy S9 excels in every department.